Dr. Dietmar Kennepohl
JavaScript is disabled for your browser. Some features of this site may not work without it. 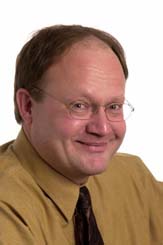 Most of his teaching experience has been in a distributed and online setting. He holds both a university and national teaching award. Over the years his research interests have included chemical education as well as petroleum, main group and coordination chemistry. His research in chemical education concentrates on the use of innovative distance delivery methods for undergraduate laboratory work. For example, the development of home-study chemistry kits (http://science.pc.athabascau.ca/chem217.nsf/experiments2?OpenPage) which are regularly used for AU’s CHEM 217 course or the Canadian Remote Sciences Laboratories (www.remotelab.ca) portal done in collaboration with NAIT.

During his tenure at AU has been Acting Vice President Academic, served two terms as Chair of the Centre for Science and has been Program Director for the general B.Sc. and B.Sc. (Post Diploma) degrees. He was also a visiting professor at the University of Otago in New Zealand (1999-2000), Georg-August-Universität Göttingen (2007-2008), and the Open University in the United Kingdom (2008).